6 Fun and Historical Facts about Soapstone 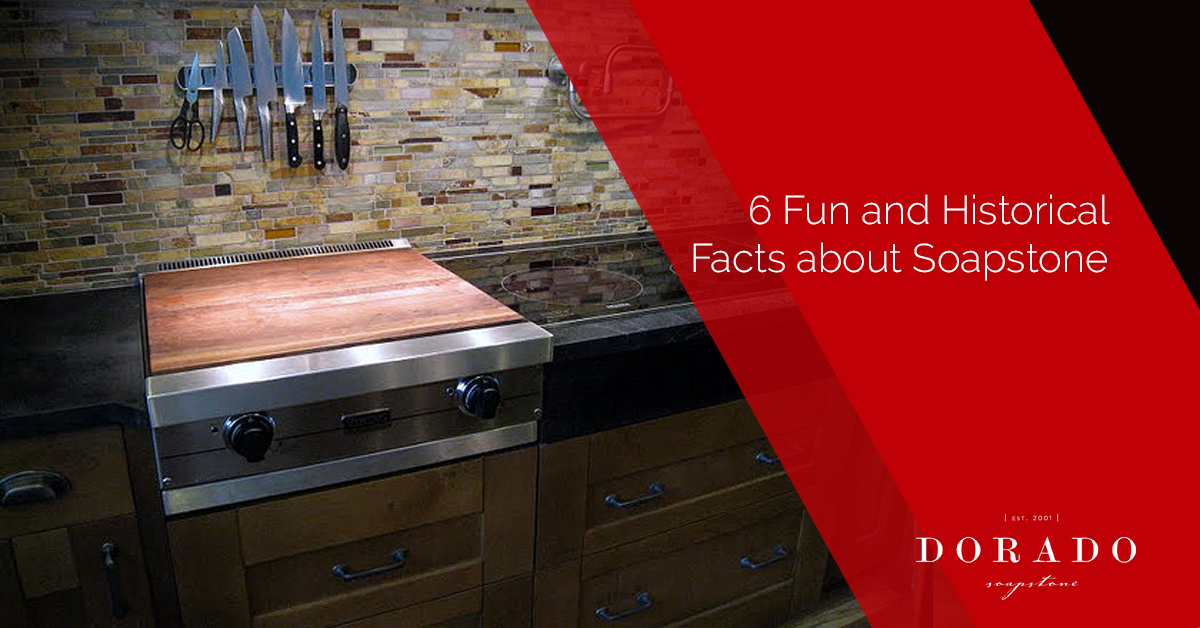 In recent years, soapstone has become a popular material for applications around the home – in bathrooms and kitchens as countertops, in fireplaces and wood stoves as surrounds, and indoor and outdoor spaces as tiles. But there’s more to this material than just home uses! Learn more about the popular stone that has many applications and a rich history that dates back to the Stone Age.

What’s In A Name?

Ever wondered why it’s called ‘soapstone’? Due to the high amount of talc in the stone, many softer variations have been reported to have a soap-like texture to the touch. This texture earned the material its modern name, which is much easier to pronounce than its obsolete name, magnesiocummingtonite.

Soapstone, like granite, is made up of many minerals. While talc is the main ‘ingredient’ of the stone, there are many variations in the makeup of different soapstone slabs and deposits, with anywhere between four to eight minerals coming together to create the material. Depending on the different minerals and how much of each reside within a soapstone deposit, the stone can then be used in a variety of applications, from countertops to carving.

In the days of the Stone Age, humans discovered that soapstone was not only easy to carve, but also had heat resistant properties, so these early people used the stone as heating rocks, cooking slabs, and bowls & pots. As time progressed, the use of soapstone helped advance humans into the Bronze Age as they realized the material was heat-resistant enough to carve into metal casting molds for tools and weapons, too.

Soapstone is a metamorphic rock, which means that it is created naturally by transforming other rock types that already exist. However, soapstone itself can also be changed into other types of rock called enstatite and cristobalite, by heating it to temperatures between 1,830–2,190 °F. When soapstone is changed into these materials, the end result is a much harder stone that has the same durability and electrical properties as the original soapstone.

Soapstone is commonly found throughout many different sections of the world and due to its easy-to-use properties, has been an important part of many different cultures. In arctic climates, soapstone has historically been used in lamps and heating apparatuses in homes. In addition, small blocks could be heated over a stove and tucked into bedding to keep warm while sleeping or into sleighs to keep hands or feet warm while riding. Elsewhere in the world, carved and glazed soapstone could be used to create signets, amulets, traditional carvings, tombs, and even bowls or pots.

Of course, soapstone is well known in modern times as a great countertop material, but because it’s so versatile, soapstone is probably in more places around your home than you’d expect. Because it has a low conductivity and is easily shaped and fired, soapstone is commonly used as an insulator in electrical components and housing materials. In addition, those same properties make soapstone great for use as an ice alternative – it’s frequently used for whiskey stones or other types of beverage chilling.

Bring History and Durability into Your Home Today

Add soapstone to your home in the form of a beautiful and durable countertop or fireplace by getting in touch with us at Dorado Soapstone. Or, if you’re not sold on soapstone, you can learn more about quartz alternatives at our sister store, NuStone Quartz!